Note: Well, it’s only been 10 months since my last post 😅!! As you can imagine our chicks are now a fully fledged flock! Life happened, and I had to put posting on the back burner until things settled down. And now we’re back! I’ll be doing several posts over the next week to get you up to speed on our fine flock, with plans afterwards to update bi-monthly, on the 1st and 15th of each month.

As our flock grew, they became less interested in basking in the warmth of the heat lamp, and more interested in hopping, scratching, and pecking their way through the brooder in the cutest mass of destruction you have ever seen. We stopped using puppy pads at this point, (3 weeks,) because the chicks had started tearing them to shreds and flipping them over, which defeated their purpose in acting as a “better barrier” between droppings and the pool. Having just moved into a new home, we had TONS of packing paper left over, and this proved to be a cheap and effective alternative.

It was obvious that the chicks needed more stimulation throughout the day to keep them occupied and healthy. We introduced a DIY chick-sized perch. We used a 1″ spade bit to bore two holes 6″ apart in two scrap pieces of 2×4. We inserted the end of a 1″ diameter dowel into each of the holes in one 2×4. We then capped the end other end of the dowels with the other 2×4. (see the picture to the right.) The chicks enjoyed learning to balance on their new toy, although it was a few more weeks before they would begin sleeping on it. 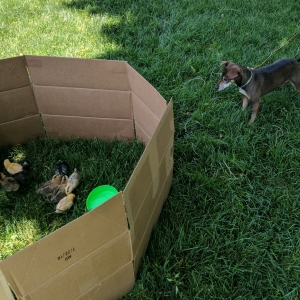 We also began to expose the chicks to the great outdoors with trips to the backyard. We were careful to keep them corralled in areas where there was plenty of shade, but with some exposure to sun if they wanted to warm up. At first we used some flattened cardboard boxes as a sort of pen to keep the chicks together. While it worked well at confining the chicks, it wasn’t very predator proof. which meant we needed to constantly be watching them, and couldn’t let them enjoy being outside for as long as they could have liked.

Ultimately we switched to using a large dog kennel so that the chicks could remain outside for extended periods of time. This solution worked extremely well. The chicks were safe and had plenty of space. That is until we reached… CHICKEN PUBERTY!

Ok, so technically it wasn’t chicken puberty, because the chicks were still small and no where near becoming sexually mature. They were starting to get their first set of adult feathers! I just thought they looked like the chicken equivalent of gawky, growing, human teenagers at this point. Still cute… but in an ugly sort of way 😁 (Also if you are thinking the center barred “pullet” looks a lot like a rooster in the making.. you’re right.) 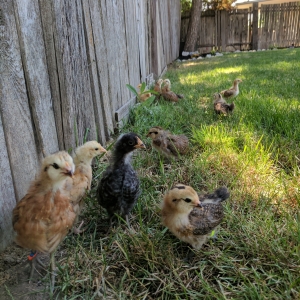 At this point (4-5 weeks) we began to let the chicks explore the yard under careful supervision. They had their first experiences of catching and eating their own prey (grubs and worms) and we could really see their flock mentality at work. We also started to get pretty good at chicken herding. We did have one harrowing experience where someone got under the fence and on to the horse property next door. 😖 Fortunately she survived and is happily laying eggs today! Never underestimate a chick’s ability to squeeze through tight spaces!

The chicks also received an updated perch, which some began to sleep on.

But even with the increase of indoor and outdoor stimulation. We felt like we were just barely keeping up with the flock’s spatial needs. We were fortunate that even with all 13 birds cooped up together, we weren’t having any problems with aggressive plucking or fights, and we really didn’t want to invite problems in by keeping everyone in closer quarters than was healthy.

And so we hit the UT version of craigslist in search of our flock’s next home.

More on that next time!

Hi there, I'm Anne, and he's Matt. We love husbandry, DIY, and the great outdoors. Stay up-to-date with our latest projects and adventures by following our blog.